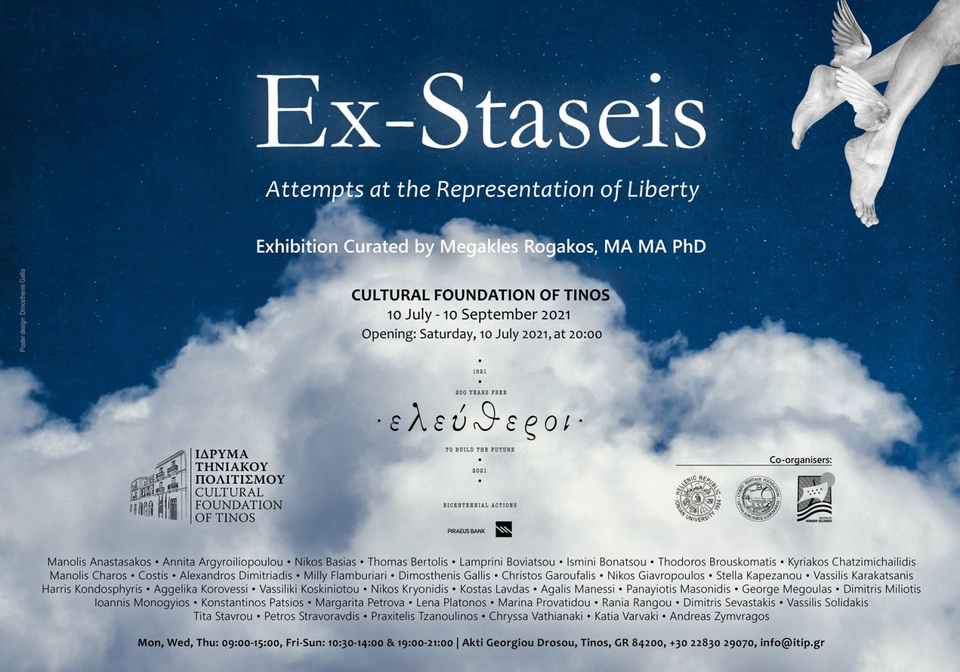 “Ex-Staseis: Attempts at the Representation of Liberty”

“Ex-Staseis: Attempts at the Representation of Liberty”

The Cultural Foundation of Tinos in collaboration with the Corfu Heritage Foundation presents the visual art exhibition “Ex-Staseis: Attempts at the Representation of Liberty” curated by Art Historian Dr Megakles Rogakos.

Rationale: On the occasion of celebrating the 200th anniversary of the Greek Revolution of 1821, which concerns the liberation of the nation from the Ottoman yoke and the creation of an independent nation state, the issue of liberty stands out. The Region of Ionian Islands aimed to promote the role of the national poet Dionysios Solomos with events that bear the general title “Hymn to Liberty”. Part of these events, which include lectures and concerts, are two visual art exhibitions curated by Dr Rogakos – “Hymn to Liberty”, a historical exhibition at the Municipal Gallery of Corfu (4 – 31 August 2021), and “Ex-Staseis: Attempts at the Representation of Liberty”, an exhibition of contemporary art at the Cultural Foundation of Tinos (10 July – 10 September 2021).

Facts: The Ex-Staseis exhibition is thematic and concerns the evolving conception of liberty, as defined in the past and shaped by the present. The concept of liberty is multifaceted and lends itself to philosophical analysis. In the colonial past, the subject of liberty was morally instructive with the specific aim of eliminating the enslaving yoke, which was a necessary condition for the creation of an independent state with free citizens. At present, in an increasingly materialistic age, the subject is mainly about inner liberty, that is, the independence of thought and action from the gravity of authorities, superstitions, superstitions and prejudices. Looking at the cultural history of the world, only a few facts about liberty stand out. This exhibition explores the origins and evolution of the idea of ​​liberty and examines its current significance, based on these facts.

Explanation: The title Ex-Staseis is a witticism, etymologically derived from the composite verb existimi (ek + istimi), which means an intense mystical experience in which the mystic eliminates contact with reality and the world of the senses and is interested in the spirit and direct communication with the divine element. Here, it has the character of a word pun that works the same in Greek and English. It means the transgression, the state of coming out of oneself, which supposedly occurs when one experiences the essence of freedom. The poster of the exhibition presents the ptinopous, the mythological human foot of Hermes that bears feathers and enables him to exceed the possibilities of walking. Here, it is of interest for the paradoxical but interesting combination of the foot as a point of contact with the earth and the wings that lift it from the ground. In this way it refers to the term ex-staseis of the exhibition, as a means of transgression from material reality towards spiritual liberation.

Album: The album that accompanies the exhibition is a broad tribute to the national anniversary of 1821. It includes studies on the Greek Revolution, presentation of the forerunners and heroes of the National Rebirth and special research, supported by the Region of Ionian Islands, on the role of the Heptanese in the National Liberation Struggle. The second part, which concerns the Ex-Staseis, includes a treatise and a brief commentary on each exhibit by the curator of the exhibition. It is offered at the symbolic price of 20 € and is available in two languages ​​- Greek and English.

Additional Action: In the context of the exhibition, educational activities will be carried out for children, teenagers and the general public.

Opening Day: The opening of the exhibition will take place on Saturday, 10 July 2021 at 20:00 in the Nikolaos Gyzis Exhibition Hall of ITIP.

Visual Material: High resolution images from the poster and works in the exhibition can be found at the following hyperlink: www.corfuheritagefoundation.org/ex-staseis/ 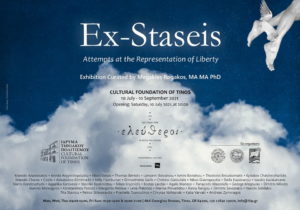